Read These Instead: The Hunger Games, The Diabolic, Firstlife, The Handmaid’s Tale, 1984 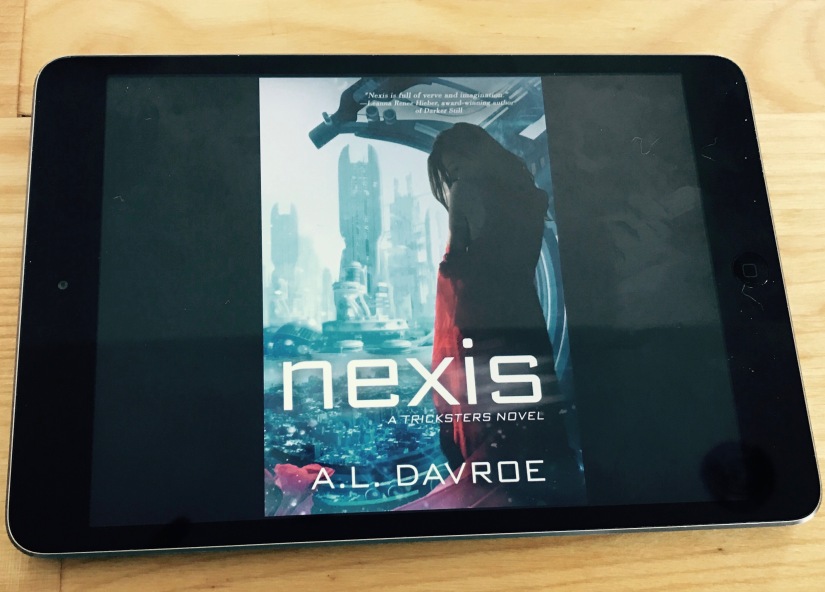 This is as good a time to write this review as any, given how much furor Harlequin Teen has received over The Black Witch lately… I read Nexis with full intentions of reading the sequel, Redux in time for its release, but I can’t in good conscience read Redux, let alone finish Nexis. Which I feel really terrible about because I received Redux not just in exchange for an honest review from the publisher, but I got it as a granted Wish on NetGalley… If anything, I hope this post raises awareness as to the types of things publishers should be aware of when considering sensitivity reads.

This series has an interesting enough premise. It’s set in a post-apocalyptic world (called Evanescence, by the way. I hope that sets the tone…) where humans have let the Earth fall to ruin. The poor are left to rot in the toxic air of the outside world while the elite literally live in their own bubble of ignorance. It’s essentially a cheap imitation of The Diabolic. The elite pat themselves on the back for doing a favour to the poor by creating virtual reality video games that allows people to essentially live a second life. (So basically, virtual reality Sims.) Fine. Cool. The author says to just roll with it and let it happen.

In amongst this dystopian world is Ellani, who happens to go by 500 different pet names, half of them cringe-worthy. She’s a stuck up, bratty teen obsessed with boys and disrespectful to her father, who tries so hard to teach her how the Earth once was and all the terrible things human beings have done to it in their selfishness. I can see where Davroe is going with this. It’s heavy-handed, and you expect Ellani to get it at some point and realise she has to do something about it. But nope.

In one ear and out the other.

While her father’s busy trying to teach her empathy for the world that once was, she’s too preoccupied with begging for plastic surgery for her birthday because she’s the only one who hasn’t been altered in some way. She also happens to solely accept validation in the form of how many boys notice and fall in love with her. So vapid is she, she’s apparently “in love with” the prince, who never gives her the time of day, never said a word to her, and doesn’t even know who she is. Not only that, he owns what Davroe is calling Dolls, who are basically slaves he uses to experiment cosmetic surgery upon… If this were, say, The Hunger Games, this would be making all sorts of really intense social commentary on just how corrupt and beauty-obsessed society has become. But no, this, just like everything else, is treated as the norm.

Not only is cosmetic surgery completely normalised in this world, so is assimilation of culture. It’s explained early on that black people were completely weeded out of the gene pool. They’re literally extinct. At this point, I have to put down my ereader and whisper eugenics to myself, which is never a word I want to associate with books I’m reading unless it’s something making important statements against it. This book is not, and in fact, is so blasé, I almost miss when they use the actual word eugenics to explain the way people look so homogenous. And it’s not in a “eugenics happened and now the world is fucked up” way. But in a “and also, eugenics happened… anyway…” way. Casual as you please. As if the reader’s just supposed to accept it and move on. Because that’s exactly what the characters do…

So, Ellani enters the game, which takes all its world-building from how the world used to be before mankind destroyed it. And for 4.5 seconds, she’s taken with how beautiful it is and what a shame that the sky and wildlife and trees and rain are gone. And I think, thank god, maybe she’ll be motivated to do something about it in the real world.

But then a boy comes along. And it’s instalove, so everything else she was inspired by has instantly been wiped clean from her brain (not literally, but wouldn’t that be interesting?) because clearly boys are more important than stopping planetary extinction…

Just when you think I’m done describing the offensive things being so casually name-dropped in this novel, I have one more horrifying tidbit. The big, instigating plot device that gets Ellani into the game in the first place is this big crash which (spoiler alert), kills her father. Fine, you could see it coming from miles away. Alright. But then she loses her legs. And given how poorly Davroe has handled literally everything else in this novel so far, you can maybe see where this is going. Two or so chapters later, she enters the game and discovers she can have her legs back. Well, I was looking forward to seeing a disabled character kick ass in a dystopian world (again, please see The Hunger Games!), but sure, this isn’t a horrifying, ableist alternative at all…

I can now glean a couple messages Davroe is leaving with this:

Cool. With that, I have absolutely no interest, or intention of reading the rest of this series. I sincerely hope Entangled Publishing reads this review and strives to do better next time.