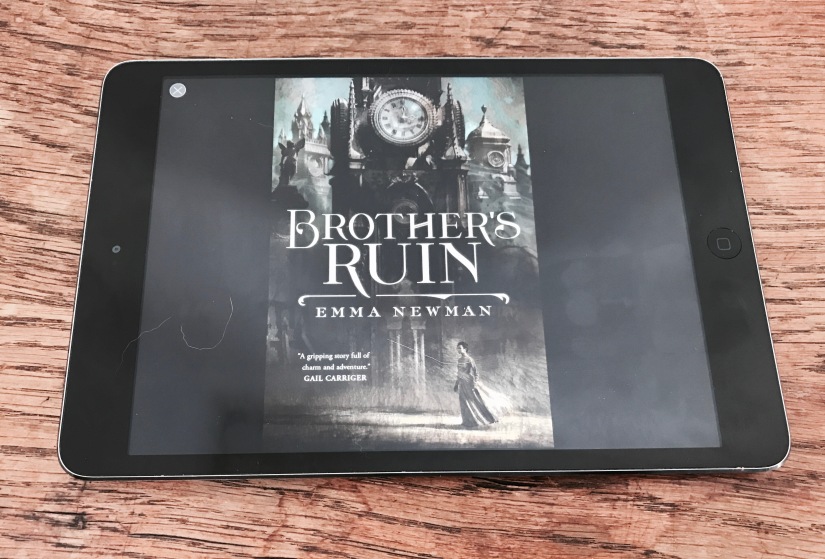 I received a copy of this book from the publisher in exchange for an honest review!

This was a nice, pleasant read. If you’re looking for a quick, simple vacation read where you don’t have to think too hard about the plot, this one’s for you. Brother’s Ruin has that very quaint quality to it that many cosy historical crime novels in women’s literature would have. It’s not a gripping thriller mystery beachside read. But a gentle mystery you save for a rainy day at your lake cabin with a cup of tea.

Because it’s so short, I don’t have too much to say about it. If  you’re stuck inside on a snow day or something, it’d definitely take you one sitting to read it in its entirety. What grabbed me about it was the fact that it’s set in the 19th century. Victorian history and literature is my jam (my undergrad was focused on it). The cover design has a steampunk vibe to it, which is always appealing. And I was personally hoping the title would hint at some tragic demise.

That’s not necessarily what happened… but it was charming nonetheless.

Newman has an extraordinary talent of making the grim underbelly of Victorian London oddly warm and inviting. Not to say that she strips away the grungy aspect of the poor and terrible living conditions, like many people who glamourise the 18th and 19th centuries do, but that she incorporates it in a very quiet, gentle way. The plot focuses on Charlotte Gunn, who is engaged to a lovely, if boring, straight laced man, and earns her own living as an illustrator on the sly. Her family is in dire straights because her father owes money to a seedy lending business, and her sickly brother is being tested as a recruit for a magical institution. It plays like your typical Victorian domestic novel. And even with the subtler supernatural elements, it reads like one. There are no intense action sequences to be found, despite the fact that shocking things do happen. Newman just has a way of glossing over the more vulgar plot points without ignoring them altogether.

Brother’s Ruin is the first book in a series Newman’s titled Industrial Magic, which isn’t the most original title in existence when it comes to steampunk magic plots. But I do like that it hints at the type of rules for her magical world building she’s created for herself. Newman’s magical focus is on this new age of industry, where factories have come into prominence and trains and clocks have become the latest thing. Applying things like pyromania or telekinesis to engineering is a stroke of genius I wouldn’t have necessarily thought of, and I like that little twist.

As such a lover of Victorian crime, I would’ve liked to see Newman go darker with it. The big twist is that there’s a death trap that causes heart failure, and I would have loved to see a proper exploration of exactly how that contraption works and the magic at play there. It was just a little too vague for me and I didn’t feel completely connected to the darker elements of the plot as a result.

One of the last things I wanted to address was the fact that the cockney dialect almost crosses the line into Dick Van Dyke in Mary Poppins territory, but it toes that line well. As a result, because it’s so concise and the dialogue is, for the most part, true to the era (which is also more than can be said for many modern writers of Victorian history), it feels like a genuine Victorian novel. It doesn’t quite have the crazy insanity of a penny dreadful, but it would undoubtedly belong in a women’s periodical.

It’s just very pleasant and safe, and a nice book to pick up if you just want to shut off for a little while.