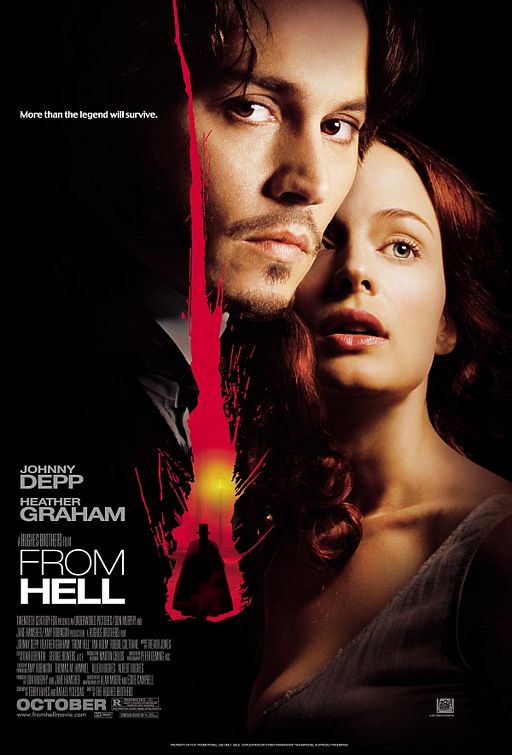 Back over the summer, while in London for a conference, I chose the most bizarre time of the year to go on a ghost walk. Taking a tour of all of Jack the Ripper’s murder sites at 7pm in broad daylight didn’t exactly offer the atmosphere one expects when looking for chills. One thing I did get out of it was a historically accurate breakdown of each Ripper victim, what they looked like, who they were, where they lived, how they came to be at the wrong place at the wrong time. Given this, our tour guide recommended a handful of screen adaptations of the famed Jack the Ripper mystery. At the top of her list?

The thing about From Hell is, it’s got that campy early 2000s sci-fi/fantasy horror thing going on that you might find in your typical episode of Buffy the Vampire Slayer. Which is to say, it’s a lot of fun. I mean, Johnny Depp is a clairvoyant detective and Heather Graham has one of the most ridiculous put on cockney accents I’ve ever heard of. It’s already off to a great start.

No matter what I come to tell you about this gong-show plot, From Hell is surprisingly on the nose in terms of historical accuracy. Given that much of the Ripper case is already shrouded in mystery, it’s easy to fill in the gaps with outrageous, over the top twists and turns. For the most part, this movie only fails at nit-picky things like instant flash photography, which would never have been possible for any early paparazzo at the time. It’s well-documented that Victorians look so stern in photos because it either takes ages for the picture to take, or they’re already dead. But how many laymen would notice a thing like that?

The clever thing From Hell does is take the Ripper story from the angle of sensationalism run rampant at the time. Which makes for completely over the top melodrama on all accounts. The mass panic evoked by the string of murders led to paranoia against foreigners, against jews, against butchers, against surgeons, against princes… Against anybody really. It stands to reason that they chose the most over the top culprit for the crimes in the end. Frankly, I would have been satisfied if the question was left unanswered. But then we wouldn’t have been blessed with such a convoluted plot twist to end all plot twists.

It’s not innovative. It’s nothing new. In fact, the path From Hell takes is pretty near identical to the twist in one of the latest Sherlock Holmes films. If it’s the 19th century, and you can blame the freemasons, why not, right? If a member of the royal family is already a legitimate lead suspect for the murders, you might as well go big or go home with this conspiracy. I can definitely see how that might be shocking to any casual viewer who doesn’t have any background knowledge of the Ripper conspiracy theories. Of all the Ripper conspiracies I’ve heard of, this one’s certainly the most bonkers. Props to Alan Moore for going there…

Going into this movie, I was expecting something a little darker. Especially as an adaptation of an Alan Moore graphic novel. Moore’s works are always a little more on the grittier, bleak side. And given Moore’s the type of elusive hermit who aggressively dislikes every film adaptation of his works, I’d warrant a guess the filmmakers took some liberties. From Hell is not quite the smart anarchist conspiracy that V For Vendetta is, but it’s certainly a cut above the Frankenstein’s monster CGI travesty of League of Extraordinary Gentlemen. Deep down, it knows it’s not a masterpiece. It’s a silly murder mystery romp and doesn’t expect to be anything less. Am I mad at it? Of course not.